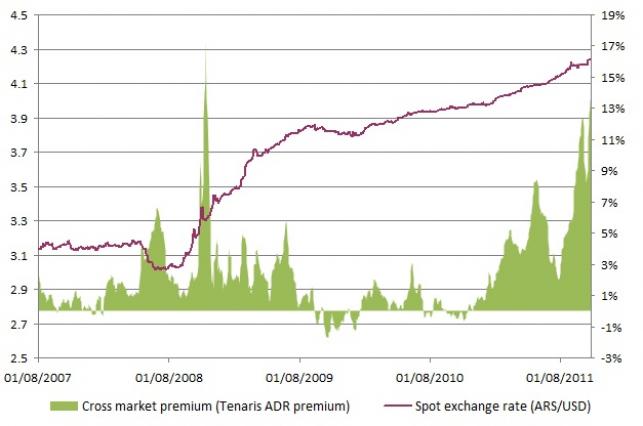 
Argentina tends to elicit extreme views from economic analysts and commentators, ranging from reborn enthusiasts that marvel at the country`s unexpected performance to the point of promoting an “Argentine solution” to European problems, to sceptics that continue to expect a sudden stop to the ongoing bonanza. However, as Paul Krugman (an enthusiast) recently pointed out (Krugman 2011), a “consistently negative tone of reporting on Argentina” seems to be the rule. “Betting on another Argentine default may be going too far. But betting on a hard landing may not be,” concluded a recent piece in the Financial Times.

Schematically, Argentina's latest looming crisis would stem from a currency loop – a narrowing trade surplus (due as much to an import boom in an overheated economy as to two-digit inflation and the resulting real appreciation) leading to capital flight (in anticipation of a faster depreciation), leading to a fall in central bank reserves (the flipside of the government`s reluctance to let the peso float), feeding back into depreciation expectations, capital flight and reserve losses. In short, nothing that a small dose of the hard-earned exchange-rate flexibility cannot solve.

A bit of perspective seems to clarify the diagnosis. Argentina in the 2000s followed an idiosyncratic balance-of-payments pattern – dollars came from the current account (the reflection of an early collapse of imports and, particularly, a boom in volumes and prices of commodity exports) and left through the financial account (a reflection of underdeveloped capital markets, a persistent degree of financial dollarisation and the already mentioned scepticism). Excess dollar flows (those deemed to appreciate the peso beyond politically acceptable levels) went to build up international reserves (Figure 1). As a result, Argentina managed to keep a positive current-account balance and an undervalued peso (at least relative to its neighbours, and judging by its positive current-account balance).

Figure 1. Where do the dollars come from?

Now that export dollars appear inadequate to support a slow but steady real appreciation and peso assets with negative real interest rates no longer yield attractive dollar returns, savers are turning to the dollar. And, in the context of a dollar rebound during the recent global turmoil, the Argentine variety of leaning-against-the-wind exchange-rate intervention (aimed at reducing appreciation during the upturn to be able to depreciate more comfortably in the downturn) becomes procyclical – the peso appreciated nominally on a multilateral basis (Figure 2) as local demand weakened.

No surprise then that capital flight increased and reserves declined accordingly (Figure 3), and that market pressure remained intense, with cross-market premiums and the parallel spread at record highs (Figure 4).1

Predictably, the dollar hoarding is starting to take its toll on the real economy, through a decline in bank liquidity that is raising deposit rates (Figure 5) and tightening lending costs and credit standards, thus threatening to cool down a personal credit boom that played a part in the strong performance of the durables sector.

The response so far has been to strengthen controls on imports (through import surveillance measures such as quid pro quo import licenses) and on dollar purchases (by tightening controls on unreported outflows), impose surrender requirements on mining and oil exports, and repatriate foreign assets held abroad by insurance companies. All are one-off measures that trade a boost to dollar supply today against a potentially lower supply tomorrow (if, for example, the flight in other quarters strengthens or FDI declines as a result of those measures, or in anticipation of new ones).

Why not let the peso float? Here we can only speculate. On the one hand, there seems to be a political stigma. Whereas a swift 10% correction may be tolerable and even welcome in Brazil or Chile, in Argentina it may be construed as a sign of policy incompetence or as the preamble of the next currency crisis. On the other hand, there is the two-digit inflation – with the economy running at full employment in most sectors, some fear that the pass through of a discrete depreciation may be high. This may have been the case last year but, under a “new normal” of modest global growth, with stable commodities, a cooling economy and soft labour markets, the reference point appears to be not 2010 but 2009, when the peso was allowed to adjust as much as 27% and inflation actually declined (Figure 6).

What to expect? From half empty to half full

The recent elections showed the government at its peak in terms of popular support. The outcome was in no small part due to a macroeconomic strategy that maximised growth (at the expense of inflation) and distributed it into generous corporate profits, strong employment and stable real wages, while enhancing fiscal resources to fund social protection and political transfers.

Naturally, this virtuous distributional arrangement would be harder to sustain if growth goes down a notch. Fiscal resources (aided in the past by disguised pockets of fiscal savings and, more recently, by the appropriation of pension fund assets) are already running thin. And private profitability is being put to test by higher costs that cannot be passed through prices as before, due to weaker demand. In addition, there is a correspondence between fiscal deterioration and inflation, since the very item driving public spending above budget is energy and transportation subsidies – the flipside of artificially depressed tariffs and transportation tickets. So is this the beginning of the new crisis or at least, the long-awaited hard landing?

The first thing to note is that the canonical emerging crises of the 90s were essentially currency crises stemming from short foreign currency positions – either directly in the public sector (foreign currency-denominated sovereign debt) or, indirectly, in the corporate or banking sectors (ultimately bailed out with public funds). The narrowing or, in many cases, the reversion of this foreign currency position in the 2000s virtually eliminated the chances of such a crisis – as witnessed by the financial resilience of emerging markets to the post-Lehman sell-off. Argentina is a case in point. The introduction of export taxes in 2002, the 2005 sovereign debt exchange, the accumulation of international reserves and the “neglect” of financial markets (namely, the sovereign deleveraging, including through the use of central bank reserves) dramatically reduced the net foreign asset position of the public sector (Figure 7). Thus, the financial crisis hysteria of the perilous 80s and 90s was replaced in the 2000s by the business cycle neurosis typical of more advanced economies.

Moreover, because of their already-noted dollarisation bias and the resulting capital flight, Argentineans own a considerable stock of foreign assets abroad, a large share of which is held in low-yielding high-grade paper.2 In this context, a faster depreciation that brings the multilateral exchange rate back to where it was at the beginning of the year should diffuse devaluation expectations and speculative demand for the dollar. In addition, the positive wealth effect of a devaluation on dollar asset holders should help the real estate and durables sectors to surf the down-cycle – as it did, to a much larger degree, after the 2002 devaluation (see Levy Yeyati 2011b).

A second structural change, almost as important as the eradication of currency imbalances, relates to the peso balance of fiscal accounts. The broadening of the tax base (mainly through the introduction of export and financial intermediation taxes) and a steady increase in the (mostly centralised) tax receipts were decisive in creating the political space to cater to multiple constituencies and in disciplining political competition. It was also crucial to fund the government`s flagship income policies (a universal child allowance and the extension of social security coverage) as well as important budgetary increases in education and scientific research – all of them with significant political dividends (Figure 8).

Figure 8. The dividends of fiscal resources

In this light, the exchange-rate adjustment needed to stop the reserve haemorrhage may prove to be minor, provided a depreciated peso stops the speculative capital flight and lures offshored savings back home. Looking forward, however, a serious attempt at price stabilisation (through the end of CPI manipulation and the launch of a proper monetary programme) is a necessary condition to contain the real appreciation of the peso and diffuse depreciation expectations, avoiding a recessionary adjustment and ensuring the fiscal resources to support domestic demand as in 2009.3

Put simply, a balanced post-election scorecard for Argentina would note, on the downside, the risk that global headwinds may reduce growth to a less comfortable level (after all, as Figure 9 shows, Argentina was not immune to the 2009 global collapse), eroding political support as the fiscal space to manage distributive conflicts and inflated expectations narrows.

On the upside, it would highlight that a low and declining debt ratio, a balanced currency position, a relatively undervalued currency and a growing stock of offshored private savings should ensure access to foreign capital were the current account continue to deteriorate.

At any rate, neither a continued miracle nor an inevitable hard landing seems to be on the cards in the near term.

Author's note: This piece is based on “Argentina: The Exchange Rate Trap”, included in Brookings Latin American Economic Perspective: What have I done to deserve this? November 2011.

1 The cross-market premium is measured as the price difference between the same asset as traded in the domestic market and in a foreign market. While it is typically computed based on liquid stocks that trade both domestically and as American Depository Receipts in the NYSE, in the case of Argentina there are also several bonds (most notably, the USD Discount) that also trade in both markets and offer an alternative vehicle (see Levy Yeyati, 2011a, and reference therein).

2 Indeed, as the figure shows, according to official estimates the country as a whole appears to have been a net international creditor since its 2005 debt exchange. While these numbers exclude Paris club arrears and bonds in default, adding the former and pricing the latter at market value would still leave the country a positive net foreign asset position.

3 Other elements of an often discussed but never implemented agenda could also contribute to revert the flight but look more improbable: an IMF Article IV still appears political inedible and a restructuring of the Paris club debt without the IMF signature would entail front-loaded dollar payments at odds with the current dollar shortage.

This article may be reproduced with appropriate attribution.

How Argentina left its Eurozone
03-04-2011
Financial globalisation in emerging economies: Myths and reality
16-11-2011